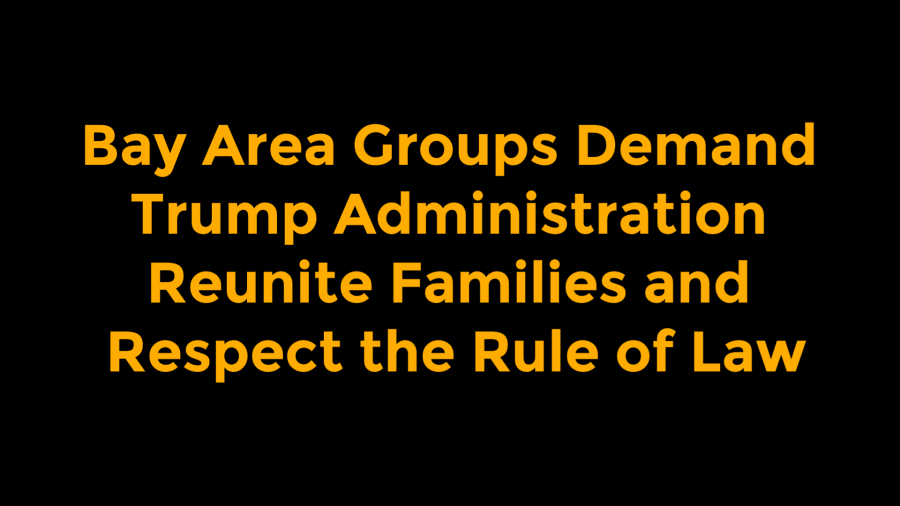 A diverse group of Bay Area organizations will gather on July 26 to demand the Trump Administration immediately and fully comply with federal court orders to reunite families torn apart by the inhumane “zero tolerance” policy and to provide ongoing trauma treatment for affected children.

Representatives from professional, religious and community groups will join together at 11 a.m. on Thursday, July 26, 2018, at the San Francisco Federal Building (90 7th Street) to demand the United States government live up to the inalienable right to human dignity enshrined in our Constitution and to highlight the ongoing medical, legal, and moral emergency created by the government’s unconscionable conduct.

“The recent injunction to end family separation was a promise made in our names to reunite children and parents who have been separated the cruel policies of our government. As the Trump Administration continues to flaunt the rule of law, extending its manufactured crisis, we must remain vigilant to ensure every child is back in their parents’ arms without further delay,” said Ted Lempert, president of Children Now, a leading children’s rights advocacy and research group based in Oakland.

Today marks San Diego federal judge Dana Sabraw’s final deadline: families with children from five to seventeen years old must be reunited. Judge Sabraw recently admonished the government for its noncompliance with duly authorized orders from the court, focusing on the damage caused to these children by forcible separation from their parents. Child trauma experts have repeatedly warned that these actions may have lifelong medical and psychological impacts on affected children.

“Children’s health and well-being are adversely affected by these separations and the resulting institutional care. Harmful effects from the related toxic stress and trauma can last a lifetime.

Every attempt should be made to keep families together and out of detention as they await hearings,” said Kris Calvin, CEO of the American Academy of Pediatrics, California.

“Detention inflicts irreparable trauma on children,” said Jesse Hahnel, executive director of the National Center for Youth Law. “While the separation of children from their parents has justifiably sparked outrage, there are an additional ten thousand immigrant children sitting in federal detention facilities today, some of whom have been there for years. These children also need to be released to their families now.”

“Our teachings hold that we must love our neighbor, welcome the stranger and protect the vulnerable – and there’s no-one more vulnerable than these children. We must solve this crisis and do so now for all our children’s sake,” said Executive Pastor and Canon for Social Justice Ellen Clark-King of Grace Cathedral in San Francisco.

“We are taught that we must welcome the stranger living in our lands because we were once strangers in a strange land, to speak truth to power and to demand that justice roll down like a mighty stream. The Jewish people have seen this before and we will not be quiet in the face of something that goes against what we are taught,” said Rabbi Sydney Mintz of Congregation Emmanu-El in San Francisco and Bend the Arc Bay Area board member.

More than a dozen organizations representing thousands of Bay Area residents support today’s event. By including religious, legal, and medical leaders and national advocacy groups, today’s event presents a united front against this callous practice and in support of the institutions critical to the defense of our republic.

“Child separation and the ensuing abuses are a crime against humanity and a serious blow to due process and democratic governance. This policy has created an unprecedented Constitutional crises that must be addressed, but worse it has fostered an incredibly cruel and unhealthy environment for these families,” said Mary Kelly Persyn, child advocate, attorney, co-lead for Lawyer Moms of America – California and event organizer.

The speakers at the press conference will include, in alphabetical order:

View all posts by Keith Kamisugi